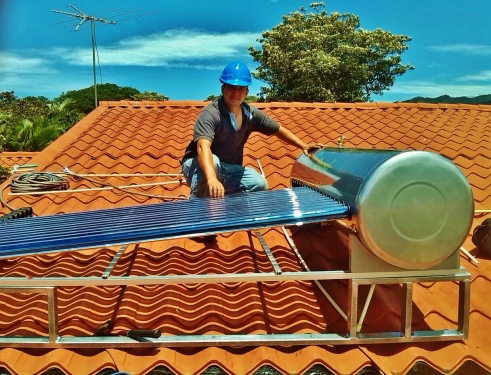 Our First Installation to a paying customer was a rewarding experience.  We had to build a special rack to hold the tank in the right position towards the sun, Luis did a superb job of welding one up.

Don Hickman told us not to bother hooking up the electric, he knew it would work.  So we did the job, fixed some leaks and got such a satisfied customer, he came back for Solar Panels later!

“We had a new solar water heater installed by Paul Furlong in mid-July. The results have been absolutely amazing! Our electric bill is already $60 less but because of the billing time frame I expect it to be about $90 less for each month going forward. That means that the heater will pay for itself in about 15 months. I originally was concerned that the heater wouldn’t produce sufficient hot water during rainy, overcast days but that has not been the case. Today has been totally overcast and we have plenty of hot water. I should add that we did not connect the built-in electric heating element. I didn’t want to bother with running an electric line up to the roof for the heater so it is strictly solar. Even so we have hot water to spare. My only regret is that we didn’t install this sooner!” Don

Problem Child:  Really the only install we had problems with.  Although, as you can see below, our customer was thrilled with the hot water he got, but it began to cost as much or more as his old bill.  His builder had put his hot water system in the garage  …. 30 meters (nearly 100 feet) away and our customer didn’t want to move the pipes.  Not only does the water get cold going through pipes in the concrete, cold water pores into the tank!  He understands this and knows he has to move the tank to his roof of the house to make it work right.  So far he’s happy enough to leave it where it is.   If we get to move the tank, I’ll keep you up on the changes. 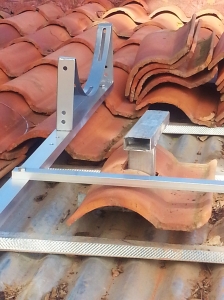 We already have hot water! Preparation and installation onto our traditional clay tile roof took a day-and-a-half. The project was completed in the afternoon and we had hot water later that evening. This seemed impossible because the new tank only received a couple of hours of partially overcast sunlight that afternoon. Paul managed everything professionally and the project was completed exactly how it was presented and quoted. We are actually looking forward to our next electricity bill to see the cost savings of this solar system compared to the electric water heater. An unexpected benefit was the large amount of garage space that was recaptured when the old water heater was removed. Fantastic! <<<<<<<>>>>>>>

Paul, Just a quick note to say thanks for a great job. Your technicians are top drawer and your expertise was indispensable. My electricity has dropped from over 100,000 colones to 27,000 colones a month. The quality of manufacturing of the equipment was state of the art. We’ve had some pretty dreary weather over the last few weeks with fog, clouds and rain and I’m glad to say we have not gone without hot water. Thanks again for your help. Joe, Sent from my iPad

We recently installed solar panels in order to reduce our electric bill which was getting to be a bit much. I can’t begin to tell you how happy we are that we did so! Watching that electric meter run backwards is pure joy! CR Solar did the install and they did a beautiful job. The work of installing 20 panels was done quickly (2 days) and everything is very neat and tidy. Most days we are generating 20-24 KWH of electricity while using only 20 or so. The result is that we can use our Jacuzzi/hot tub once a week for free! If we use it more than that, then we’ll have to pay ICE a little bit. In other words, the system is generating all the electricity we use on a daily basis plus use of the hot tub once per week. The savings on the electric bill will pay for the system in a little under 5 years. If you own your own home I strongly recommend that you have CR Solar install both a solar hot water heater and a solar electric system. They do great work and then you can quit paying your life savings to ICE. Don Hickman

Thanks Paul,
The solar water heater you installed for is working great.  After having it installed about 6 months ago, we are realizing an average of a $60.00 monthly savings on our electric bill.  I would highly recommend this system as a replacement to a conventional hot water heater system.  It won’t take long to recover my investment, and I do not need to worry about electric outages and having no hot water.
Jeffery and Diana

This is our new pool heating system and the testimony of a happy customer.

We installed 7 pool collectors in Estanquillos of Atenas, And this is what our satisfied customer says:

I wanted to thank you for such great service installing the solar panels for our swimming pool.  The workers were courteous and very thoughtful about where they were placing the equipment to be installed and cleaning up everything before they left.
The solar panels work perfectly and we met with our pool man to make sure he understood how everything operated.  The pool heats up instantly when the sun hits the water in the morning, and it is an addeded pleasure to have it with our home.
We sat for a year not using our pool as we live up in the mountains and the weather is so cool at night that the water does not have enough time during the day to heat up and retain the heat.
The solar panels were an excellent idea!  Thank you for meeting with us and explaining the benefits of having solar panels for our pool.  It is exactly as you said it would be.  My husband is especially excited as he has been in the pool everyday!  Again,  thank you for such great service and making our pool now a real enjoyment to have!
Sincerely,
Thomas and Patrice Jones
Estanquillos, CR”

These folks, that I have found via AMCR advertisement, will be supplying my solar water heater when I do the new roof….we have exchanged a few e-mails…..and the new roof will be designed to accommodate the weight of the water, and installed when those workers are constructing the roof…I will plumb it into the house after…..Fuzzy Furlong sounds like good folks….
…………………………………………………………………………………………….